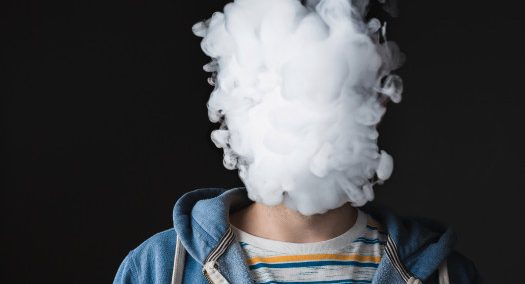 The face of vaping young man on black studio background

As of December 20, 2019, the age to purchase any tobacco- intended product is now 21. This new federal law creates a controversial topic within the recent vaping problems of students in high school and the Elkhorn community. More information on enforcement dates and basic guidelines for citizens and tobacco retailers will be released by the FDA as it becomes available.

These guidelines include that tobacco establishments cannot sell tobacco products to anyone under the age of 21. In the statement the FDA mentions that it is not only tobacco banned to under-aged individuals, and that the products included are hookah, e-cigarettes (vapes), dissolvables, smokeless tobacco, cigarettes, all cigars, roll-your-own tobacco, pipe tobacco, and future tobacco products that meet the statutory definition of a tobacco product.

Nebraska state legislation had announced the age will change from 18 to 19 and not 21. According to Legislative Bill 149, the products are still the same of what an individual cannot purchase under legal age but if said individual is caught using or purchasing products, they will be charged with a Class V misdemeanor.  As of now, the potential to change it up to 21 is still in discussion, but January 1, 2020 will remain 19.

The only exception in federal discussion (NOT state) for the newly established law is for those age 18 before the passing of the law can and are grandfathered in; meaning that they are able to purchase these products despite their current age because they were legally able to prior to the pass.

Due to the changing of age from 18 to 19 in Nebraska, the ability for teenagers to get these “tobacco intended” products decreases and will decrease more as the years go on. For a freshman through, now, senior class can not easily come into contact with a 19 year old as they could an 18 year old, senior. Even more so for the states that kept the new age 21.

A predicament to think about is how does this affect schools. Will this actually decline the VERY present problem of students using e-cigs (vapes) in the school parking lots, bathrooms and halls? The Department of Public Health and Human Services (DPHHS) believes that this newly founded law will protect young adults- and teenagers- from a lifetime addiction to nicotine. A DPHHS director, Sheila Hogan, studied the percent in which people became addicted before 21 and the results were a shocking 95%. Hogan concluded that the age change could bring the numbers down and hopefully bring a more healthy lifestyle to the majority, primarily in the young adult age range.

Although the country and legislation hopes for a great success from the passing of this bill, teens are teens and they’re sneakier and more clever than most perceive. If their addiction is strong enough, they’ll find a way to grasp the “Forbidden Fruit” of refills; but, there is still a strong belief of the bill having good effects. Let us all hope for the effectiveness of this highly controversial bill.