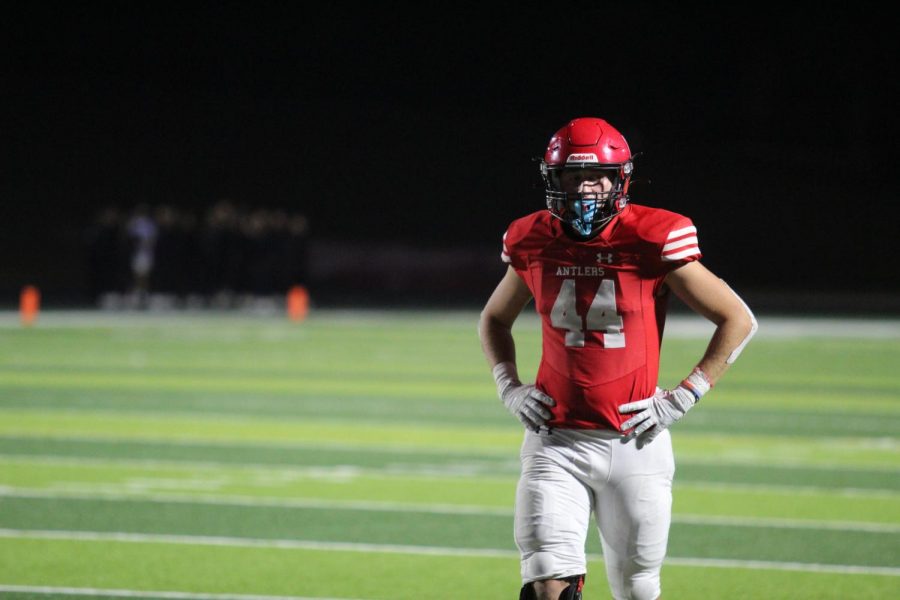 Player of the game Gannon Gragert waits for the play call.

Elkhorn dominates to move on in the playoffs.

A rematch between the Antlers and Vikings took place last Friday. After the narrow 13-7 victory for the Antlers in the last meeting, a dog fight was expected, but it was not what was given.

Elkhorn received the opening kickoff and scored on a 10 play, 66 yard drive. The drive was highlighted by two big pass completions to Gannon Gragert and Drew Christo. A missed extra point attempt meant the Antlers had a 6-0 lead. After the first drive, the defense for both teams shined. Waverly gained a first down before being forced to punt. Elkhorn got the ball back but were forced to punt after a first down as well, their only punt of the night. Waverly again punted on their next offensive drive. On the ensuing drive, Elkhorn gained a first down on a run from quarterback Gutschow, but three incomplete passes led to a 4th and 10. However, a fake punt turned into a 22 yard by Gannon Gragert gave the Antlers a new set of downs in great field position. Two plays later, a 32 yard touchdown pass put the Antlers up 13-0 at the end of the first quarter.

The Antler defense stuffed the Vikings once again after Waverly gained one first down. After the punt, the Antlers started their offensive drive with a holding penalty. The rough field position was overcome however, and three completions for a total of 72 yards put Elkhorn inside the redzone. The Vikings then came up with a much needed stop after a tipped pass from Gutschow was intercepted at the one yard line. Unfortunately for the Vikings, they were unable to capitalize on their momentum and punted once again. Starting from midfield, the Antlers took four minutes off the clock, finishing the drive with a Hayden Stec three yard touchdown run. Waverly was unable to do anything in the final minute, and Elkhorn led 20-0 at the Half.

Waverly came out in desperate need of some points, but Stec prevented that, ending the Vikings first drive with an interception. Two plays later, Grant Gustchow found Gannon Gragert in the endzone to put Elkhorn up 27-0. After the kickoff Waverly was once again stuffed by the Antler defense. By this point, it was very clear the Vikings had been completely demoralized. Back on offense, the Antlers continued to dominate, with Hayden Stec finishing the four play drive with an 18 yard run. The score was 34-0 going into the fourth.

The fourth quarter began introducing some of the Antler backups and some of the Waverly seniors. Waverly scored for the first time of the day after a six minute drive. The next Antler drive took up 5 minutes and was the final nail in the coffin. Multiple deep pass plays from Gutschow and a two yard touchdown run from Aiden Young gave the Antlers their final touchdown of the night. Waverly fought until the end of the game, scoring once and getting a safety in their favor after the snap went flying over backup punter Brayden Jordan’s head. The Antlers went into victory formation at the end, concluding the 41-16 victory.

Elkhorn put up one of their best offensive performances of the year against arguably the best defense in Class B football. Aiden Young had just 22 yards on 14 carries and Braylen Johnson had 25 yards on 9 carries. Unlike previous games, the Antlers yardage came from the passing game. Gutschow had 245 passing yards on 11 completions and 18 attempts. Gragert had 6 of those receptions for 145 yards, Drew Christo had 3 receptions for 58 yards, and Hayden Stec had a total of 98 yards on 7 touches.

The Antlers dominating performance is promising when looking at their chances at making it to and winning the Class B championship in Lincoln. First though, the Antlers will have to get through the 9-1 Hastings Tigers this Friday, November 13th.