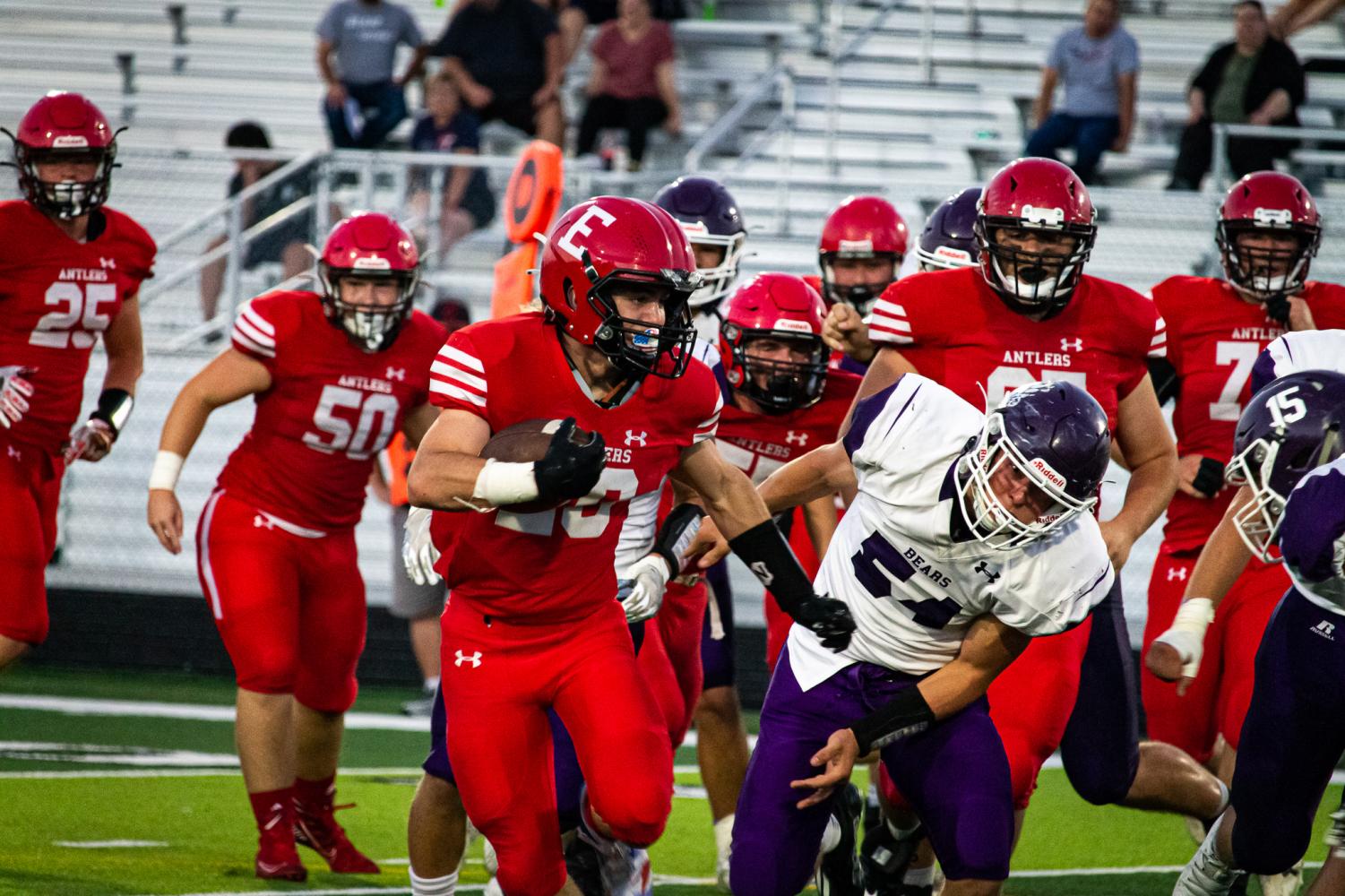 Chase and Jake: The Tuesday Take 10/5

Jake: The best team in class A is Bellevue West. I am on this hype train until it arrives in the station, which for this team is Memorial Stadium. Back to back years, this team has been the team to beat, thanks to three-star recruits Kaden Helms and Micah Riley-Ducker. Last year, Bell West was the favorite to win it all, but they got upset in overtime by a surprising Kearney team. I believe that game was a fluke. Bell West had the team to win it all, and no Avante Dickerson or Teddy Prochazka could stop them. After losing in overtime, they were angry for more and decided to get that fluke upset out of the way when they lost to Millard South in week four. Luke Johannsen has the experience to dish the ball out to his immaculate receivers, and if Bell West can do that then they’ll win. It does not matter how good Gage Stenger is for Millard South, what the Westside Wimps are doing, or if Cole Ballard figures out how to hold onto a ball for Elkhorn South. This team is stacked. No one can stop them again, and they will win it all. Side note, they also have the best backup quarterback in the state, Daniel Kaelin.

Chase: We can talk about stars, Division 1 offers, and face value all we want. No one seems to consider  that a team in Nebraska still needs to be complete. Last year everyone wanted to talk about Avante Dickerson’s team, which was Westside High School,though no one seems to remember the contributions of Cole Payton and Dominic Rezac. They were key to completing the Westside Warriors’ route of Class A football. There’s only one team this year that even remotely follows these criteria, and that team is Millard South. Last year, they were a solid team under the leadership of TJ Urban at QB, but now a new man has taken the reins of the job. The man was only a sporadic offensive player and a stubborn linebacker. That man is Gage Stenger, who is sixth in passing with 886 all-purpose yards and 10 touchdowns as of Week 5 statistics. He’s been tearing up the competition, but his supporting running backs have been nothing short of exceptional. Christian Nash and Antrell Taylor provide diverse methods to establish the Millard South run game. Nash provides the speed, and Taylor provides the wrestling state championship physicality. They could very well just run the whole game, but Jake Gassaway provides a threat in the passing game as well. They’re very well-rounded, and they are only behind one team in total offense: Bellevue West.

Jake: Listen, listen, listen, folks. I’m here to play the biased game to whom I think is going to win and I can play the bias on who I hope is going to win. Let’s start with who I hope is going to win. YOUR ELKHORN ANTLERS! Going into the playoffs last year I asked Feickert, “What are you gonna do if you run into the passing attack of Bennington in the playoffs?” Stopping the pass is going to be the key to winning. It takes two facets to stop the pass, a fast pass rush, and cornerbacks that can hold their own. It is going to be difficult to do that this year. The Antler pass rush has been nonexistent. Blair ran around them with a backup sophomore quarterback. That may be because Blair recorded their calls in previous games and proceeded to yell out the Antler’s play calls during the game, but that is a story for another day. Nevertheless, the pass rush has been abysmal. On the backend, you got a short secondary.  It is the greatest weakness of this team. Zach Linen can be the quickest and most agile player on the team, don’t tell Mikey Hart that, but when you are a foot shorter than the receiver he’ll need to play with his high jump pole if he wants a chance. Through all this, the Antlers will win. They are a comeback team with fight in them. It will take Connor Hunt to play better this week and better come playoff time, it will take a healthy running back room, and better pass coverage, but Bennington is a bunch of schmucks who can’t keep it together when the going gets tough.

Chase: Listen, listen, listen, folks. I’m not here to play the biased game to whom I think is going to win, but I can play bias on who I hope is going to win. Let’s start with who I hope is going to win. It has to be the Elkhorn Antlers, which is a semi-realistic option. It’s  a team with players that range from all-conference to all-state players. Plus, if Head Coach Dan Feickert were to win a championship in his inaugural season as head coach, you might as well call up Disney for a plotline. Now the team that I think is statistically and analytically taking home the state-shaped trophy, is the Bennington Badgers, and here’s why. First off, running back Dylan Mostek is quite literally a Bo Jackson Tecmo Bowl-like cheat code for the Badgers. He is first in rushing with 1206 yards and 16 touchdowns. That’s not a typo! On top of that, Kale Bird is back, who single-handedly took down the Antlers last year. Then there’s Bluhm who is first in receiving with 495 yards and 5 touchdowns as well. It would be easy for me to go with my attended school, but it seems to be that Bennington will be too much for everyone. The Antlers best prove me wrong, and if they do, I will have no problem with it.

Jake: There is not a legitimate reason to believe in an underdog Cinderella story this year in Class A. Bell West, Prep, Millard South, Westside, and Elkhorn South are the only teams with a chance at the title this year, and it will take a major upset for Prep, Westside, or Elkhorn South to go down to Lincoln for the state championship. Simply put, no one else stands a chance. Class B has an actual chance for an upset, and my pick goes to Waverly. They have played every loss close, so far. They stand at 4-2 with a double-overtime loss to Skutt and a 14-13 loss to Elkhorn. They are a darn good team that is knocking on the door of being undefeated. They will be tested with every game they have left, but they should win out and enter the playoffs with a chance to upset. Bellevue may be my favorite word today because Bellevue East stinks. They stink worse than a porta-potty by a public lake. They do not deserve to pick up a football. The worst two teams in class B are Mount Michael and Alliance. The only thing Mount Michael has that doesn’t make them the worst, is the fact that they have a tough schedule. Alliance is bad and they play nobody. It is unfair to hate on them, but there isn’t much to say except have fun traveling for hours to lose a game.

Chase: We’ll keep this short and sweet because there isn’t a better statistic to describe the worst team except for the record. In Class A, it’s Bellevue East, who still can’t seem to find a foothold in their program at 0-6 this year. In Class B, it’s Alliance, who couldn’t maintain their status as a one seed in basketball districts last year and sit at 0-6 in the panhandle for football. The upset contender for Class A has to be Burke, with Oregon commit Devon Jackson leading a strong but rusty Burke team to exceed expectations this season. For Class B it has got to be Plattsmouth. Meneses is still killing it, and if I were the Nebraska football program, I would throw a preferred walk-on offer at him as soon as possible.